The uppermost layer of skin, the stratum corneum, is dead skin which functions as a protective sheath against the environment. It faces the onslaught of forces like sunlight, pollution and dirt on a daily basis. This exposure typically causes hyperpigmentation, premature wrinkles and fine lines on the unprotected areas of skin. Lined and wrinkled skin appears duller and darker. The delicate areas of the face, such as the region around the eyes, have a thinner layer of skin making them even more susceptible to damage and increasing the appearance of dark circles around the eyes.

Fortunately, below this surface lies smooth, younger skin which is waiting to be uncovered. Glycolic Peels do precisely that. They exfoliate the skin evenly, taking away dead cells to reveal the underlying layer of fresh skin.

Inherently moderate compared to other chemical peels, Glycolic Peels can be rendered as gentle or mild as a dermatologist wishes them to be. They are versatile enough to address an entire spectrum of skin concerns but they still remain superficial peelings. Glycolic Peels are a time-tested solution, especially as the first line of action, and form an essential part of a dermatologist’s toolkit, especially for treatments such as:

– Skin Glow treatments: where they dissolve and release dead layers of skin to let the radiant, fresh layer shine through.

– Pigmentation Solutions: where they remove the layer of discoloured, hyperpigmented dead skin and reveal an evenly toned layer below.

– Dark Circle Solutions: where the lined, dull and discoloured dead skin around the eyes is gently eased away to reveal bright, smooth underlying skin.

As the name indicates, they are based on glycolic acid which comes from sugar cane and belongs to a family of acids called alpha-hydroxy acids or fruit acids. In fact, the generic term ‘fruit peels’ is often used in common parlance when referring to Glycolic Peels.

Hyperpigmentation is deep-seated, with melanin deposits residing in the dermis, but its overall presentation begins at the epidermal level. This means, visible improvement can be achieved quickly and easily by applying a simple operating principle: let discoloured, damaged or dead skin cell layers peel away, making way for fresh new skin.

During treatment, the Glycolic Peel is allowed to act on the skin for a predetermined amount of time based on the concentration of the solution and the dermatologist’s sense of what the individual’s skin can take. Glycolic acid penetrates the skin and breaks the bonds that hold each layer together. Once the desired number of layers have been separated and removed, the solution is washed off.

Immediately after a Glycolic Peel treatment, the skin will look slightly  pinkish.  In some cases it may continue to peel for a few days. The entire process from treatment to recovery can take a week or longer, but the results are soon apparent: clearer, brighter skin with a marked reduction in uneven pigmentation or discolouration. Realistically speaking, treatment outcomes are in the realm of improvement rather than dramatic transformation.

Infusing vitality around the eyes 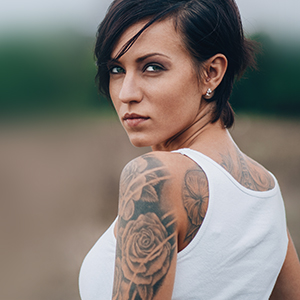 Not so permanent! Yes, tattoos can be removed

Tattoos have now become more than a fashion statement. For some, it’s the perfect way to express their love for someone special. For most others, it is a form of expressing one’s individuality, passions and beliefs. But as we evolve, our personalities change and removing the tattoo is a way to start afresh. If you no longer want a tattoo and you are wondering if this can be made possible, you don’t have to worry, for…

READ MORE
Sign up to get 50% off Consultation
X